A few hours after sunset, rising in the north-northeast is one of the dimmer constellations, requiring darker skies to identify. With a GoTo telescope or skill at star hopping, finding treasures in this seemingly empty piece of sky is possible. The rewards are certainly worth the effort! Tonight let's observe three interesting and varied objects; a nice planetary nebula, a notable chain of stars, and a fine open cluster. 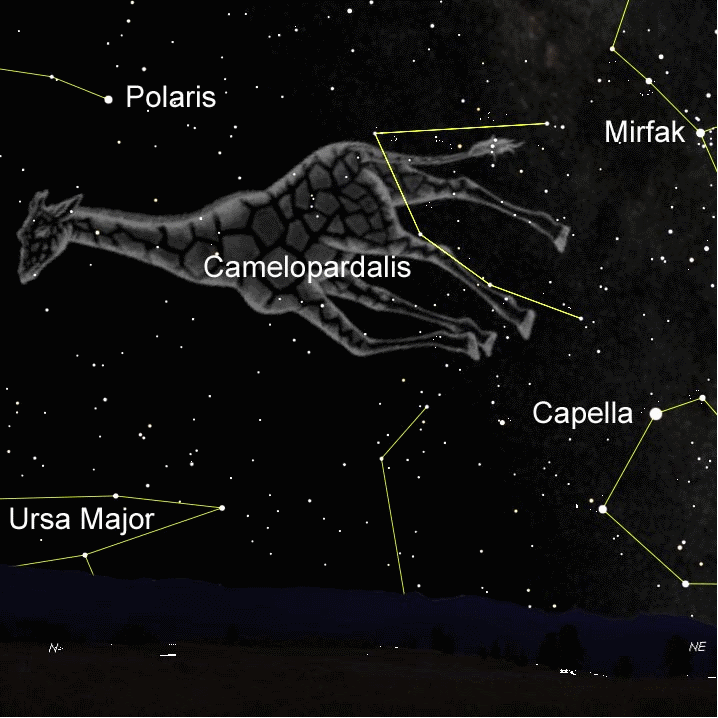 First though, let's locate this dim constellation with a name reminiscent of a safari. It is named Camelopardalis - the "camel leopard," otherwise known as giraffe! Its main stars lie between Perseus' brightest star Mirfak, Auriga's lucida, Capella, and Polaris, the North Star. Five stars define the constellation, with the brightest being magnitude 4.0 - Beta Camelopardalis. Do you know why a constellation's beta star can be brighter than its alpha star? Post a reply here, if you know the answer. All the stars in the constellation's figure at left are between magnitude 4 and 5. It is dim and challenging in urban and suburban skies.

Seek out a dark place and begin by looking for the compact open cluster NGC 1502. You can see a chain of stars above the cluster's location in this chart. Use that chain in your magnifying finder to sweep just over a degree from the arc. 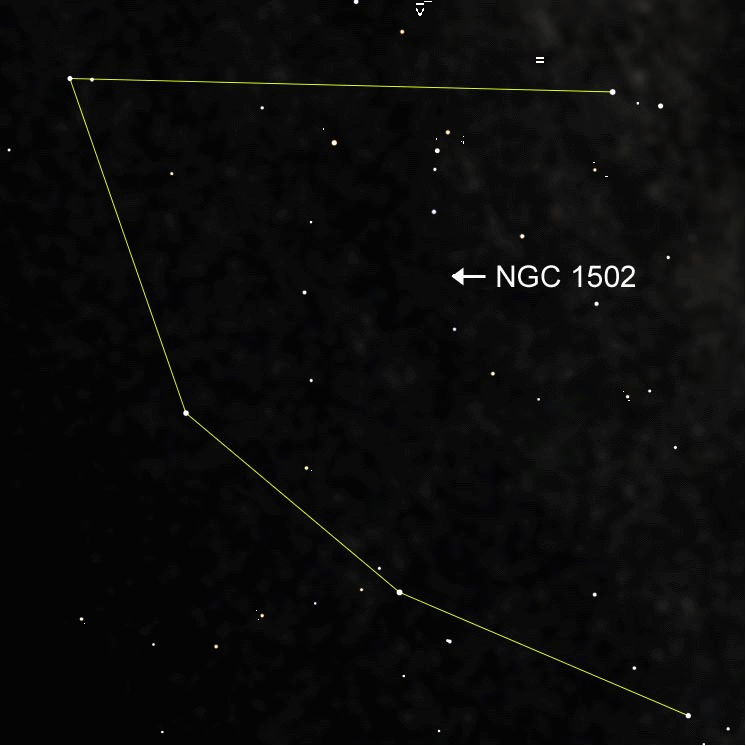 Along with NGC 1502 you'll find a chain of stars called Kemble's Cascade, named after Father Lucian Kemble of the Royal Astronomical Society of Canada by famous astronomy writer Walter Scott Houston.. Houston described it as "a beautiful cascade of faint stars tumbling from the northwest down to the open cluster NGC 1502." 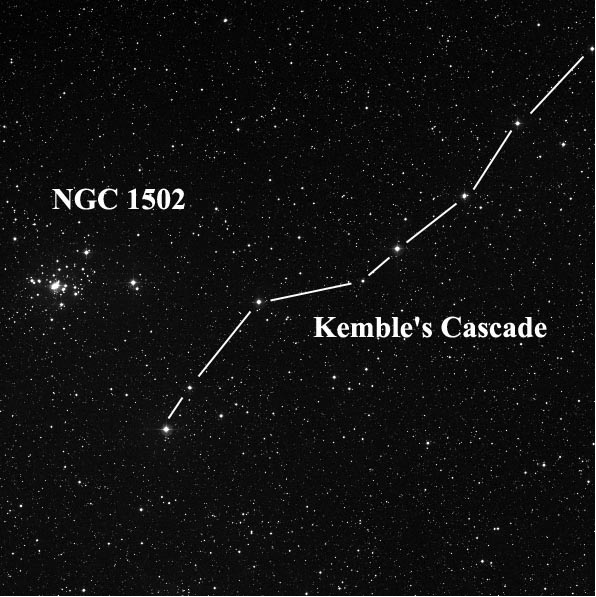 In this image from the Digital Sky Survey, I've "connected the dots" to more clearly show the chain. I'm sure you find it unmistakable. While the chain is visible in 7x50 binoculars, a telescope will resolve the cluster into a rich compact jewel, and the stars in Kemble's Cascade show off their colors.

Kemble's Cascade is an "asterism" - a recognizable pattern that is not a constellation. The cluster NGC 1502 shines at magnitude 6.9 and contains approximately 45 stars that are 2700 light years from us. It is considered a young cluster at an age of 11 million years old. 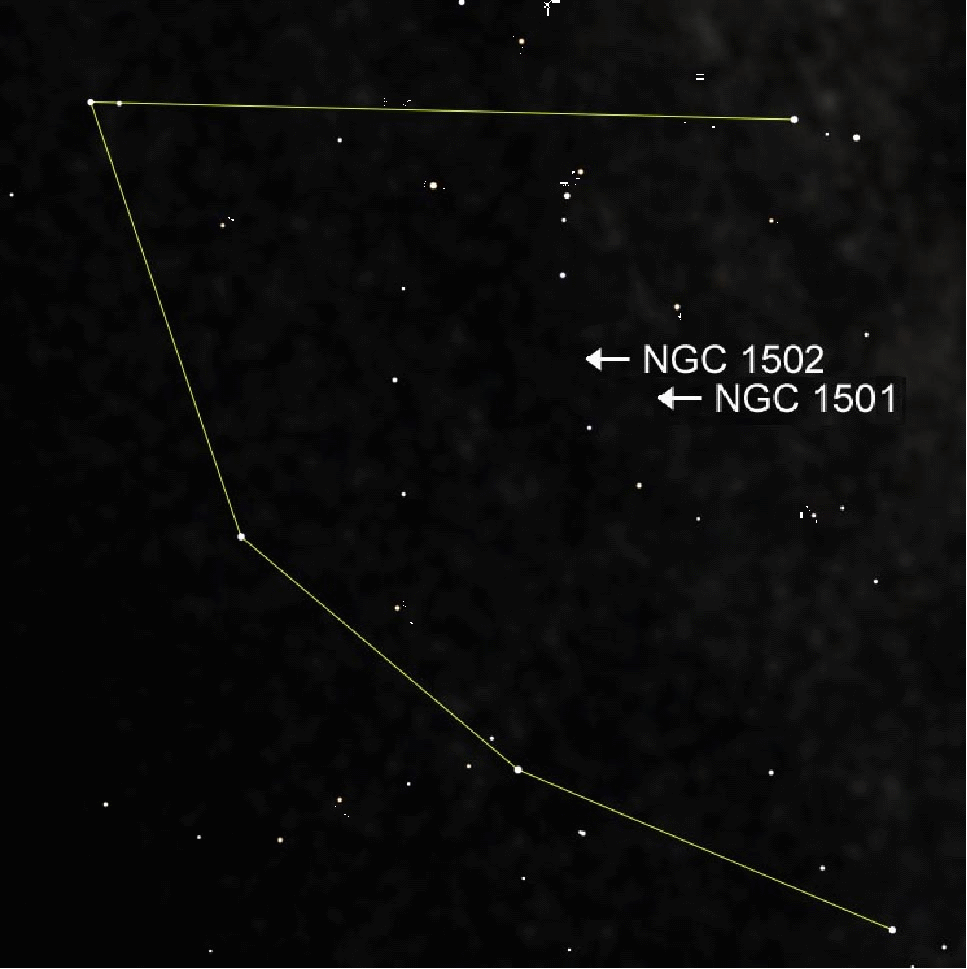 Near the open cluster and Kemble's Cascade is the nice planetary nebula NGC 1501. At magnitude 11.9 and 3600 light years distant, it is considered faint, but using a narrow bandpass filter (Orion's Ultrablock), you'll pick up some detail, in telescopes as small as six inches. Under dark skies you can find this target in a 4" telescope. 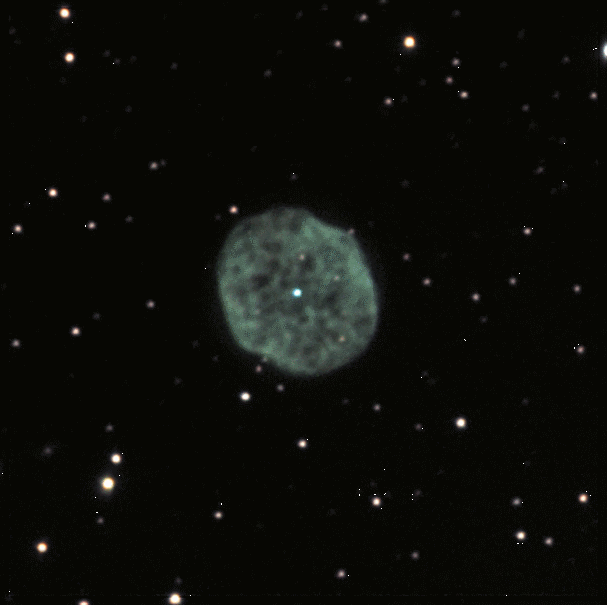 This excellent image gives you an idea of the slightly elongated shape, and the slightly uneven disk. With a bit of patience, you may even pick up the central star in smaller telescopes.

There are many objects like these in our celestial galactic backyard. Open clusters, planetary and diffuse nebulae, multiple and colored stars - there is no lack of great sights to enjoCamelopardalis y on any given night!

Mark Wagner is a life-long astronomy enthusiast and deep sky observer. He has spent the past twenty years popularizing amateur astronomy in the San Francisco bay area through his writing and community building. A past president of the San Jose Astronomical Association, he founded what is now the annual Golden State Star Party in California. Please post if you have comments, questions, sketches or images you've taken of the targets mentioned above.