There are three "realms" to explore with your telescope. The first is sometimes called the shallow sky: our solar system, including the Sun, Moon, planets, asteroids, and comets. The second is what I call the starry realm: the stars in the immediate neighborhood of our Sun, which make up the familiar patterns of the constellations we see on any clear night. These include double and multiple stars, and variable stars. The third realm is usually called the deep sky: star clusters and nebulae within our own galaxy (the Milky Way), the cloud of globular clusters which orbit around our galaxy, and the countless number of galaxies beyond our Milky Way. All three realms can be studied with any telescope.

The Shallow Sky
The easiest realm for the beginner to explore is that of our own solar system. The Moon is probably the first object at which most people look. It is easy to find, and reveals a rich surface to explore with any scope at any magnification.

Even at 30x the moon is an enjoyable target. The basic eyepieces supplied with most scopes will provide for fantastic detail.

I usually recommend a Barlow for beginners as it immediately doubles the number of magnifications available with any telescope. It's worth spending a little extra and getting a good quality Barlow, such as the Orion Shorty Plus. Using the example of the SkyQuest XT6, the standard 25mm and 10mm eyepieces will yield 96x and 240x respectively when used with the Shorty Plus. I've found 240x to be the "just right" magnification for the Moon.

The best time to observe the Moon is while it's in its partial phases, because the surface features cast long shadows emphasizing their relief. Full Moon, while pretty to look at, is rather like the desert at high noon: no shadows, so no three-dimensional effects. 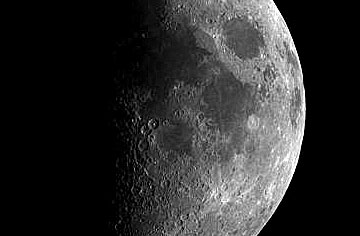 Some people find the Moon painfully bright to look at through the telescope. One way to handle this is with a Moon filter such as the Orion Neutral-Density Moon Filter; this will reduce the glare to a comfortable level. Another way is to light up the area where your telescope is located, since the Moon only seems bright because we are viewing it from a dark location in a dark sky. Even using a white flashlight will help a lot. Using a magnification over 200x also cuts the brightness.

The planets are another set of popular targets for amateur astronomers. Beginners often have a hard time spotting them, since they look much like bright stars to the naked eye. A telescope will soon reveal the difference: all the stars in the sky, no matter how large or bright, are so far away from us that they all appear as points of light. All the bright planets immediately show disks even at low magnifications. Venus and Mercury are always close to the Sun, so are mainly visible at sunset and sunrise; neither shows much in the way of surface detail, but will show a clear phase similar to the phases of the Moon. Mars is reddish in color and shows a small disk. Again a magnification of 200x or more is necessary.

Jupiter is probably the most rewarding planet for the amateur.

Its four bright moons are easily visible at the lowest magnifications, and can be watched as they change their positions from night to night, and even from hour to hour.

A higher magnification will reveal at least two dark cloud belts on the disk of Jupiter and, if you are lucky, you may catch a glimpse of the famous Great Red Spot, which nowadays is more of a pale salmon color. Colored filters will bring out extra detail.

I've saved the best for last: Saturn is a magnificent sight in any telescope. The rings are easily visible and, if you look carefully, you will spot four or five of its moons circling around it like tiny fireflies.

The Sun itself is also a wonderful object to view, but it requires a special filter and special care to observe safely. I'll talk more about that another time.

The Starry Realm
As I said above, all the stars are so far away that we can only see them as points. However, many stars are either double or multiple. These often provide striking contrasts of color and/or brightness. Two of the finest are visible in the summer: Albireo in Cygnus, a gorgeous pairing of a gold and a blue star, readily seen in any telescope, and Epsilon in Lyra, the remarkable "double double." This looks like a simple double star at first, but as you increase the magnification, you discover that each star in the pair is itself a very close double. Other stars are variable in brightness, and are studied by advanced amateur astronomers.

The Deep Sky
Beyond the stars in our immediate neighborhood lies the deep sky: star clusters, nebulae, and galaxies. Because of their distance, these objects are often faint and hard to see, and usually require a trip to a place with a darker sky, if you normally observe from the city or the suburbs.

Although scopes like Orion's IntelliScopes will guide you to these objects, most other telescopes require a bit of knowledge of the sky and some tools. First of all you will need a good map; Orion's Deep Map 600 Star Chart is a handy "road map" for the sky. Like a road map, it folds into a convenient pocket size, but, unlike most road maps, it is printed on plastic so that it won't get soggy with dew.

An ordinary flashlight will dazzle your dark-adapted eyes, so a red flashlight is essential for reading your map. I find the Orion RedBeam II flashlight to be particularly handy. Even better is the DualBeam version: it has the same red LEDs, but can switch to white light for observing the Moon and for finding those odds and ends that you drop into the grass at your feet! Both these come with nice lanyards so you can hang them around your neck and never misplace them.

There are so many deep sky objects that it's hard to know where to start. For that, I'd recommend a good guide book, such as Phil Harrington's Star Watch. If you want a better understanding of where all these objects fit in to the universe, I'd also recommend Terence Dickinson's NightWatch, one of my all time favorite books.

With your new telescope and these basic tools at hand, the sky is the limit!