I'm a sucker for action. I love change. My favorite planet is Jupiter because of its rapid rotation, ever-changing moons, and volatile cloud features. I love watching Near Earth Asteroids and comets as they move across star fields. Recently I've become addicted to watching solar flares and prominences in rapid action with my solar telescope. But most of all, I love to observe variable stars.

All stars vary in brightness to some degree. Even our Sun, which seems so stable, changes its brightness as more or less of its surface is obscured by sunspots. But there are stars in the sky that undergo vast changes in brightness and color. Many are highly unpredictable in their behavior, and need years of study to uncover the mechanisms that drive them.

The most famous are the novas and supernovas which suddenly shoot up from obscurity to prominence. Supernovas are relatively rare in our neighborhood. The last one was over 400 years ago in 1604. Novas are more common, several being observable in any given year.

Some stars appear to vary for purely mechanical reasons. These are called eclipsing binaries: two stars in a close orbit where one star eclipses the other, as regular as clockwork. Algol in the constellation of Perseus is a famous example of an eclipsing binary. 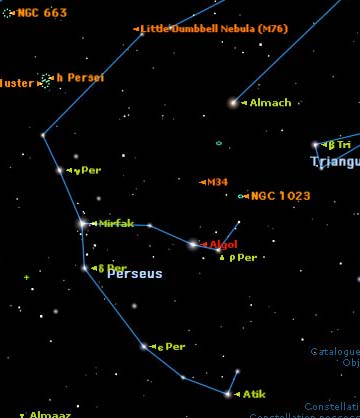 Other stars expand and contract slowly because of processes going on within them. The most common of these "pulsating variables" are long period variable stars like Mira in the constellation Cetus. Mira is larger in diameter than the orbit of Mars, and changes size, brightness, and color over a period of just under a year. It ranges over nearly six magnitudes in brightness, meaning that at its brightest, it is a hundred times brighter than when it's at its dimmest. Another group of pulsating variables is called the Cepheids, named after the star Delta Cephei. These have much shorter periods than the Miras, ranging from 1 to 70 days, and their period is closely tied to their luminosity, which has led to their use as measuring sticks to determine the distance of globular clusters and galaxies. 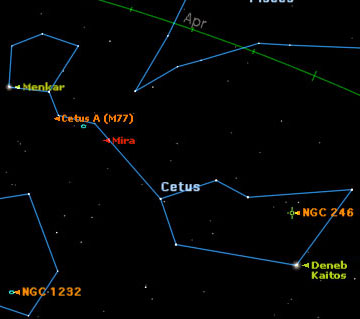 Another group of variable stars is called "cataclysmic variables." These include novas, supernovas, and the so-called "dwarf novas." These last are the stars that interest me the most because they show the most action. My favorite is SS Cygni (TCY 3196-723-1), located close to the open cluster Messier 39. This star normally sits around twelfth magnitude, just visible in a small telescope, but every few weeks it shoots up unpredictably to about eighth magnitude. If you're lucky enough to catch it in outburst, you can actually see it get visibly brighter. Stars like SS Cygni are actually close double stars consisting of a red dwarf and a white dwarf. The white dwarf is surrounded by a disk of gas stolen from the red dwarf which is drawn down into the white dwarf where it ignites, causing the sudden outburst in brightness. 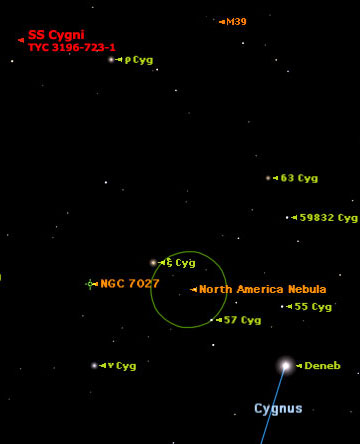 Professional astronomers realized over a century ago that there were more variable stars in need of study than they could handle, so they enlisted the aid of amateur astronomers to monitor the brightness of a number of stars well suited to amateur observation: stars which changed in magnitude over a wide range and which took a long period to complete their cycle of brightness. For many years this work required no more than a telescope and a good set of charts, and such simple visual observations are still useful today, although nowadays amateurs have access to photoelectric photometers and CCD cameras which are capable of studying just about any star. The American Association of Variable Star Observers acts as a central clearing house for all sorts of amateur variable star observations, providing instruction, charts, and other support, and giving amateurs a simple online system for recording their observations.

If you are a deep sky observer, you already have one of essential skills of a variable star observer: you know how to locate objects in the sky. It doesn't matter how you do it. I used traditional starhopping for several years, but now I use my Orion SkyQuest XT6's IntelliScope setting circles to locate my variables. Once you've located the variable, you estimate its brightness as compared to other stars on the chart, and record the time of the observation. With a little practice you can make estimates to within a tenth of a magnitude. You can then log onto the AAVSO's web site and enter your observation. Within ten minutes it will be moved into their database of over ten million observations, and you can see your observation on a light curve along with those of hundreds of other observers around the world. What could be neater?!

Unlike most of the observations amateur astronomers make, variable star observations have a serious side. By making a numerical estimate of the brightness of a star at a particular point in time, you are logging a piece of scientific data. The AAVSO maintains records online of every observation submitted to them over the past hundred years, keeping the records available to researchers around the world.

On a typical night, I'll observe about a dozen stars from "my" list of about sixty stars visible at different times of year. I've added the database of the AAVSO's stars to my copy of Starry Night, and use this to prepare finder charts and plan what stars I'm going to observe on a given night. This database can be downloaded from:

These files are in compressed format. After you have uncompressed them, you will find both the compiled databases and the text files which they were built from. Move the files ending in ".ssd" to the "Starry Night Pro 5/Sky Data" folder. Macintosh users will have to Ctrl-click on the Starry Night® Pro 5 application and select Show Package Contents to see the Sky Data folder. The next time you run Starry Night® Pro, you should see additional options in the menus for these datasets.

The biggest challenge in finding a variable star is that you're looking for something that may be quite bright, or may be below the magnitude limit of your telescope, totally invisible to you. So what you look for is the star field, the pattern of stars surrounding the variable. Once you've found the field, you then check to see how bright the variable is. You then consult your AAVSO charts to see which stars are closest in brightness to the variable. Comparison stars on the charts are marked with their brightness to the nearest tenth of a magnitude. Because a decimal point might be confused with a faint star, they are left out, so that a 9.7 magnitude star is marked "97" and a 11.4 is marked "114" on the chart. You try to find a couple of stars, one slightly brighter than the variable, one slightly fainter, and then estimate where the variable falls between them.

For visual observing as I have described above, the equipment needs are very simple. There are many variable stars within range of a pair of small binoculars, and some that can be observed with the naked eye alone. On the other hand, access to a large telescope lets you follow stars that become very faint at minimum.

I have found it advantageous to use eyepieces with a wide field of view, since they show me more of the sky at any given magnification, and let me see more comparison stars without having to move the telescope about. My favorites are Tele Vue Naglers and Panoptics, and Orion Stratus.

My current strategy is to survey "my" variables using my Orion SkyQuest XT6 IntelliScope. I've programmed the controller with the coordinates of my variables, so I can quickly move through the list. Any variables which are currently too faint to be observable with the 6", I revisit the next night with my larger 11" Dobsonian.

If you're still not sure whether variable star observing is for you, I'd recommend reading Starlight Nights by Leslie Peltier (Sky Publishing). Peltier was the finest variable star observer of the 20th century, and his book is an entertaining introduction to a wonderful man and his love of the stars. It's probably my very favorite astronomy book.

The AAVSO web site includes everything you need to get started. It has a complete observing manual

I'd recommend starting on stars that are easy to find and visible all year round, such as these stars in and around the Big Dipper.

A final warning though: variable star observing is highly addictive. Variable star observers probably spend more time at the eyepiece than any other amateur astronomers because, unlike deep sky or planetary observing, they are not dependent on dark skies or steady seeing. For years I carried out regular variable star observing every clear night from the middle of a large city, even when the Moon was full. The only thing that can stop you is clouds!