August 2 - 4, 2013: How to find the multiple star system Mu 1 and Mu 2 Scorpii, Messier 14 in the heart of the Milky Way, and the extragalactic Messier 54, and the amazing facts about these objects that makes hunting for them so exciting.

Tonight we'll continue our studies of multiple star systems and have a look at Mu 1 and Mu 2 Scorpii, about two fingerwidths north of Zeta Scorpii. 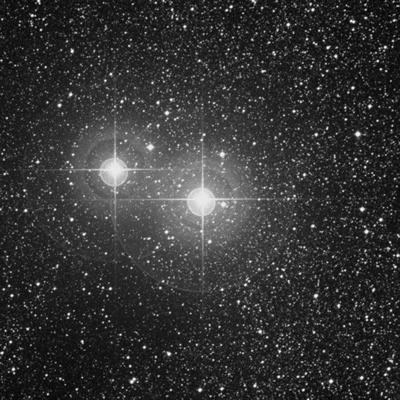 Very close to the same magnitude and spectral type, the twin Mu stars are easy to separate visually and most definitely worth a look in telescopes or binoculars. They are considered an actual physical pair because they share the exact same distance and proper motion, but they are separated by less than one light-year.

Hanging out in space some 520 light-years away, western Mu 1 is a spectroscopic binary - the very first discovered to have double lines. This Beta Lyrae-type star has an orbiting companion that eclipses it around every day and a half, yet causes no significant visual drop in magnitude - even though the orbiting companion is only 10 million kilometers away from it. While that sounds like plenty of distance, when the two pass their surfaces would nearly touch each other!

Be sure to mark your observing notes... the "Mu's Blues" are on many challenge lists. 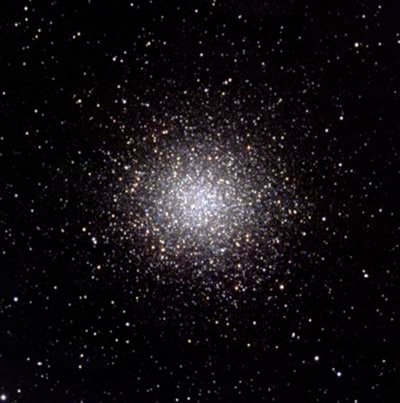 Tonight let's further our studies of the Milky Way objects with one of the globular clusters nearest to the galactic center - M14 (Right Ascension: 17:37.6 - Declination: -03:15). Located about sixteen degrees (less than a handspan) south of Alpha Ophiuchi, this ninth magnitude, class VIII cluster can be spotted with larger binoculars, but will only be fully appreciated with the telescope.

When studied spectroscopically, globular clusters are found to be much lower in heavy element abundance than stars such as our own Sun. These earlier generation stars (Population II) began their formation during the birth of our galaxy, making globular clusters the oldest of formations that we can study. In comparison, the disk stars have evolved many times, going through cycles of star birth and supernovae, which in turn enrich the heavy element concentration in star forming clouds, and may cause their collapse.

Of course, as you may have guessed, M14 breaks the rules. It contains an unusually high number of variable stars - in excess of 70 - with many of them known to be the W Virginis type. In 1938, a nova appeared in M14, but it was undiscovered until 1964 when Amelia Wehlau of the University of Ontario was surveying the photographic plates taken by Helen Sawyer Hogg. The nova was revealed on eight of these plates taken on consecutive nights, and showed itself as a 16th magnitude star - and was believed to be at one time almost five times brighter than the cluster members. Unlike 80 years earlier with T Scorpii in M80, actual photographic evidence of the event existed.

In 1991, the eyes of the Hubble were turned its way, but neither the suspect star nor traces of a nebulous remnant were discovered. Then six years later, a carbon star was discovered in M14.

To a small telescope, M14 will offer little to no resolution and will appear almost like an elliptical galaxy, lacking in any central condensation. Larger scopes will show hints of resolution, with a gradual fading towards the cluster's slightly oblate edges. A true beauty! 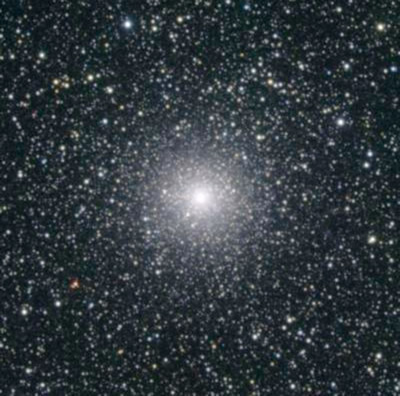 As we explore globular clusters, we simply assume them all to be part of the Milky Way galaxy, but that might not always be the case. We know they are basically concentrated around the galactic center, but there may be four of them that actually belong to another galaxy. Tonight we'll look at one such cluster being drawn into the Milky Way's halo. Set your sights just about one and a half degrees west-southwest of Zeta Sagittarii, for M54 (Right Ascension: 18:55.1 - Declination: -30:29).

At around magnitude 7.6, M54 is definitely bright enough to be spotted in binoculars, but its rich class III concentration is more notable in a telescope. Despite its brightness and deeply concentrated core, M54 isn't exactly easy to resolve. At one time we thought it to be around 65,000 light-years distant, and rich in variables - with 82 known RR Lyrae types. (RR Lyrae stars are periodic variable stars that once had similar or slightly less mass than the Sun, and are thought to have shed some of this mass.)

We knew it was receding, but when the Sagittarius Dwarf Elliptical Galaxy was discovered in 1994, it was noted that M54 was receding at almost precisely the same speed! When more accurate distances were measured, we found M54 to coincide with the SagDEG distance of 80-90,000 light-years, and M54's distance is now calculated to be 87,400 light-years. No wonder it's hard to resolve - it's outside our galaxy!

As we know, most globular clusters congregate around the galactic center in the Ophiuchus/Sagittarius region. Now, let's explore what creates a globular cluster's form... We'll start with the "head of the class," M75 (Right Ascension: 20:06.1 - Declination: -21:55).

Orbiting the galactic center for billions of years, globular clusters endured a wide variety of disturbances. Their component stars escape when accelerated by mutual encounters and the tidal force of our own Milky Way pulls them apart when they are near periapsis, that is, closest to the galactic center. Even close encounters with other masses, such as other clusters and nebulae, can affect them! At the same time, their stellar members are also evolving and this loss of gas can contribute to mass loss and deflation of these magnificent clusters.

Although this process happens far less quickly than in open clusters, our observable globular friends may only be the survivors of a once larger population, one whose stars have been spread throughout the halo. This destruction process is never-ending, and it is believed that globular clusters will cease to exist in about 10 billion years. Although it will be later evening when M75 appears on the Sagittarius/Capricornus border, you will find the journey of about 8 degrees southwest of Beta Capricorni worth the wait.

At magnitude 8, it can be glimpsed as a small round patch in binoculars, but a telescope is needed to see its true glory. Residing around 67,500 light-years from our solar system, M75 is one of the more remote of Messier's globular clusters. Since it is so far from the galactic center - possibly 100,000 light-years distant - M75 has survived almost intact for billions of years to remain one of the few Class I globular clusters. Although resolution is possible in very large scopes, note that this globular cluster is one of the most concentrated in the sky, with only the outlying stars resolvable to most instruments.

Until next week — Dreams really do come true when you keep on reaching for the stars!