When you're new to astronomy, the night sky can be simply overwhelming. The first time you see a dark, starry night away from city lights, you'll be left speechless at the amount of stars you see. While you might know comfortable and familiar constellations like the "Big Dipper", or the three belt stars of Orion, seeing thousands of points of lights can leave you lost. Nothing is where you expect it to be and nothing looks like what you saw on your computer!

It's not always easy asking an astronomer to teach you, and there might not be a local astronomy club where you can turn to for assistance. If you want to know what's out there and you're ready to get your first telescope or pair of binoculars, Orion's Beginning Stargazer's Toolkit has everything you need to get started, all by yourself. 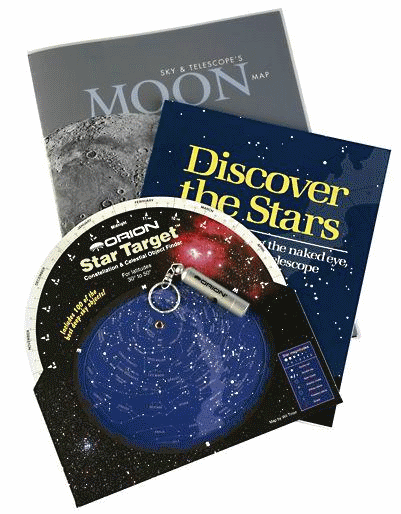 Believe me, no one comes out of the box knowing the constellations, where to find them, or what time of the year they are visible. And don't feel bad if you're not aware that the sky changes in a matter of hours, because you're not the first! Add the overwhelming task of choosing the right telescope or binoculars for you, and its understandable why many people give up on astronomy so quickly!

Orion's Beginning Stargazer's Toolkit starts with the basics. Here's what you'll get:

Planisphere: This simple star chart gives you a method of identifying the constellations at any time of year. By thinking of the 360 degrees of overhead sky as a wheel, you can adjust the planisphere according to date and time of viewing, and the constellations visible at that time will appear in the window. All you need to know is the cardinal directions - north, south, east and west. As time passes, the Earth turns and the window moves, revealing how the sky changes over a period of hours. While not everything will jump out at you, a few nights of practice is all it takes to acquaint yourself with the primary stars you can see at any given time. However, don't forget: the Moon light, like city lights, reduces the amount of stars you can see, so plan your observing nights accordingly.

The next item in the Orion Beginning Stargazer's Tookit is a book written by Astronomy magazine editor, Richard Berry. Discover the Stars is a definitive source for those who plan on observing with the unaided eye, a small telescope or binoculars. It's the perfect introduction and guide to discovering the stars. In its pages you'll learn how to choose a telescope or binocular that's right for you and your observing needs, as well as sky basics.

Once you've learned your way around the "cosmic block", Discover the Stars will deliver again by teaching you how to find more challenging objects. Much like the planisphere, the night sky can be toured through a series of maps. If you've ever used an old-fashioned road map, then you know the sections are divided in one direction as numbered blocks and in the other direction according to the alphabet. Star charts are arranged in much the same way - one direction is divided by degrees, the other by hours. The charts provided in this book are simple to use and will lead you to amazing deep sky objects that your equipment is capable of seeing. What good is a computer telescope that can show you 40,000 objects if 95% are outside the telescope's range? This type of knowledge only comes through practicing astronomy and a "no batteries required" way of learning.

The star maps in Discover the Stars are well done, giving you 12 individual charts that show the night sky on a monthly basis, plus an additional 23 charts that are far more detailed. Imagine learning about colorful stars, double stars, star clusters, nebulae and galaxies! You'll become acquainted with mythology, how to locate the planets and even explore the Moon.

Once you have optical aid, you're going to want to explore the Moon when it dominates the sky. It's not only our nearest astronomical neighbor, but viewing the craters, seas and mountain ranges of its topography is fascinating. There is no other "world" out there that shows such details with modest equipment. With the Beginner's Toolkit's Moon Map by Sky & Telescope Magazine, you'll quickly fall in love with learning lunar features for yourself. Imagine sitting by the hour as your eye takes in Apollo landing sites and other famous mission marks. You'll soon know the names of tall mountain ranges and deep craters, sail the lunar seas and walk across vast deserts. The Moon Map is something that you'll keep on hand forever, which may be why the designers laminated it for lasting durability.

Another indispensable part of astronomy is a red flashlight. While it might be tempting to just use a regular torch, a white light will do just that - torch your night vision. If you have ever walked into a dark room after being in a brightly lit one, you'll know just what I mean. Two steps in the door and ouch! You've just bumped into a table that you didn't know was there. After a few minutes, your eyes will begin to adjust and you can "see" what was hidden... but who wants to wait ten minutes every time you refer to a chart? By using red light, your pupils will remain dilated while you use the Orion Beginning Stargazer's Toolkit under the night sky - a nice touch that you'll very much appreciate.

Learning the night sky isn't going to happen... well, overnight. However, if you stick to the three P's of astronomy - patience, practice and persistence - you'll soon find your way around comfortably. Each piece of the Orion Beginning Stargazer's Tookit is well thought out and will provide you with not only years of valuable information, but pleasure as well.

Tammy Plotner is a professional astronomy author, President Emeritus of Warren Rupp Observatory and retired Astronomical League Executive Secretary. She's received a vast number of astronomy achievement and observing awards, including the Great Lakes Astronomy Achievement Award, RG Wright Service Award and the first woman astronomer to achieve Comet Hunter's Gold Status. Tammy Plotner has been a compensated contributor to the Orion Community since November 2012. Orion's product review policy is to post reviews regardless of the writer's positive or negative feedback of the product.