With pleasant autumn evenings arriving, many people may be thinking of buying a telescope. There's a lot of bad advice out there; here are some samples, counterbalanced with the facts.

Myth: Magnification is a good way to judge a telescope

Reality: Any telescope that has interchangeable eyepieces can produce any magnification. The useful magnification on a telescope is much more limited, and depends on the size of the telescope's aperture (diameter of lens, mirror, or corrector plate). A telescope with 60mm aperture has a range of useful magnifications from about 12x to 120x, no matter what the advertising on the box may say. And a larger telescope, such as an 8" reflector, will have a larger, but still limited range, 40x to 300x. Unless you live in a place with very stable air, such as Florida, 300x will be your upper limit on magnification no matter how big your telescope is.

Myth: Refractors are better than reflectors for planetary observation 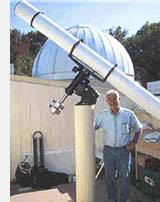 Reality: Like many myths, there's a kernel of truth in this one. For a given aperture, a refractor, with its unobstructed aperture, will have better contrast than a reflector, because of the scattering of light caused by having a secondary mirror in the light path. However, this breaks down when faced with the realities of economics and mechanics. An 8" reflector or Schmidt-Cassegrain costs $360 to $2100 and weighs 40 to 75 pounds, complete, and is easily transported in a small car. An 8" refractor costs at least $3500 for the optical tube alone. The tube is eight feet long and would weigh 40 pounds, requiring a mount that costs at least as much as the tube and a permanent observatory to house it in.

Myth: Smaller apertures show more than larger ones when the seeing is poor

Reality: On many occasions I've masked my telescopes down under marginal seeing conditions in the hopes of improving their image, but never have I noticed any improvement. All it does is make the image dimmer and reduce the amount of detail visible.

Reality: I lived for many years in a big city, and never once was I tempted to use anything other than my largest telescope for all kinds of observing. If light pollution reduces what your naked eye sees by three magnitudes, it will also reduce what your telescope sees by exactly the same amount, three magnitudes.

Reality: This myth comes from people who are knowledgeable about photography, where "faster" lenses gather more light than "slower" lenses. In telescopes used visually, the focal ratio is irrelevant in terms of how bright the image will appear at a given magnification. Short focal ratios (f/4 to f/6) are generally preferred because they make the scope more compact and allow a wider field of view, while long focal ratios (f/8 to f/15) are preferred because they provide higher magnifications with relatively simple and inexpensive eyepieces. Objects are equally bright in either scope, given identical magnifications.

Myth: I don't want a Dobsonian: it doesn't look like a real telescope

Reality: Despite the fact that the Dobsonian design offers the most "bang for the buck" in any telescope size, some people seem to be turned off by its looks. It doesn't have a lens at the top of the tube, and the mount looks more like a cannon than a precision instrument.

But, take a look at any modern research telescope, such as the Subaru on Mauna Kea: 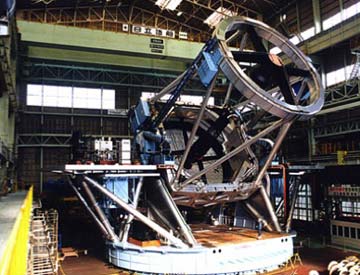