There comes a time in every amateur astronomer's life when you just need a little telescope. I'm not talking about small optics. There are a whole host of small aperture telescopes which possess very fine features and are worth every last cent (which is usually comparable to a telescope five times its size). No, I'm talking about a small telescope that you aren't afraid to leave in the trunk of your car, or let your grandkids play with... a telescope worthy of a stellar view and equally at home spotting wildlife. A telescope you could take along on a camping trip, or allow up in a tree house! For me, the tried and true choice is the Orion 70mm GoScope. 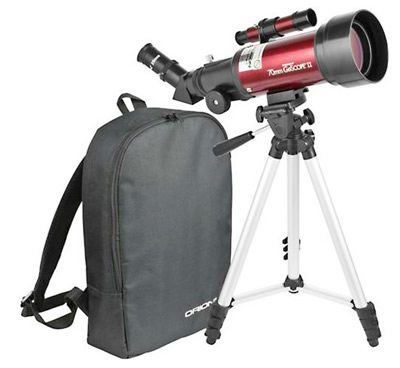 This little gem of a refractor telescope isn't a toy. It's a 70mm achromatic optical instrument that just happens to be affordable. It weighs in at less than four pounds fully assembled, and comes with a field tripod, two 1.25" Kellner eyepieces (25mm and 10mm), 45° correct-image diagonal, and a 5x24 optical finder scope.

Even more handy is the Orion GoScope II 70mm Refractor Travel Telescope, which fits everything neatly in its own little custom designed backpack, so you're not carting around a bunch of loose parts. Having everything contained means you're 100% more likely to have a telescope with you at all times in your car's trunk, or tucked behind your pick-up truck's seat. And everything is there...

Imagine being out and taking a drive when you spot a herd of deer along a distant tree line. They are feeding and feeling mighty comfortable about where they are. In just brief minutes you can have the GoScope assembled and on the easy to use alt-az mount. Bingo. You can count the tines on that buck. Perhaps you're camping and you see a flash of color through the trees. Is that an elusive bluebird? Are you seeing a bear or Bigfoot? Just turn the 70mm optics its way and find out!

However, don't limit yourself to just terrestrial views. The Orion GoScope is a perfectly capable astronomical instrument as well. With slightly more aperture than an average pair of binoculars, it is going to provide very satisfactory views of the Moon, bright deep space objects and even bright comets! The optical finder scope is quite sufficient, and the included eyepieces are well thought-out... just the right focal length for more extensive views, and not so much magnification as to render them useless in certain studies.

One of the best parts about the Orion GoScope II 70mm Refractor Travel Telescope is that it's inexpensive enough that you don't fear using it. Go ahead! Let the grandkids take it out and play with it. While I wouldn't suggest putting it beside the pool, it is rugged enough that less experienced hands aren't going to destroy it. Children have a wonderful sense of curiosity, and why dampen their enthusiasm by continually worrying if they are going to put a fingerprint on an eyepiece that costs about as much as a small house - or wondering if they'll strip a gear on a mount that's as expensive as a motorcycle.

Although the GoScope would be a little advanced for small kids, it's perfectly within the capabilities of a pre-teen and right up the young teenager's alley. It doesn't cost any more than a video game and just think... what young Carolyn Porco or Carl Sagan might you inspire?

Warning: Please note this product was not designed or intended by the manufacturer for use by a child 12 years of age or younger.

Tammy Plotner is a professional astronomy author, President Emeritus of Warren Rupp Observatory and retired Astronomical League Executive Secretary. She's received a vast number of astronomy achievement and observing awards, including the Great Lakes Astronomy Achievement Award, RG Wright Service Award and the first woman astronomer to achieve Comet Hunter's Gold Status. Tammy Plotner has been a compensated contributor to the Orion Community since November 2012. Orion's product review policy is to post reviews regardless of the writer's positive or negative feedback of the product.