Camping Under Dark Skies: What to Bring
Print
Email Friend 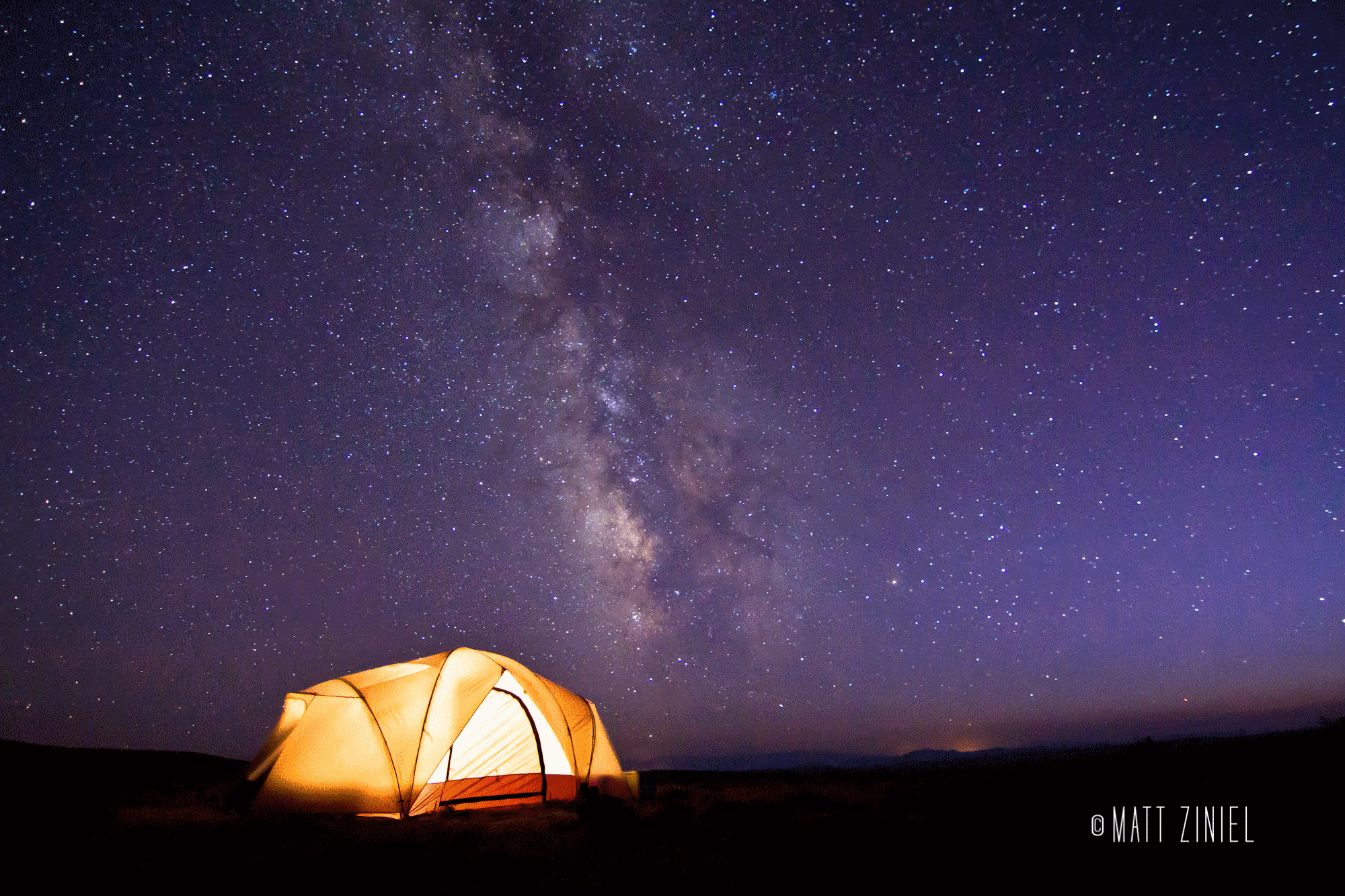 Image: Camping out under the Milky Way in central Wyoming, by photographer Matt Ziniel.

More often than not, camping destinations promise darker skies than you might be used to at home. It's a chance to really get in touch with the stars, but sometimes you don't realize this until you're looking up in awe.

Plan ahead for your next camping trip under dark skies. If you're backpacking or trying to pack light, a pair of binoculars is a surefire way to enhance your stargazing experience at night, not to mention bird watching and terrestrial views during daytime hikes and explorations.

We've identified three pairs of binoculars that have performed well on camping trips, thanks to the help of our Facebook fans:

Another small accessory that will enhance your experience camping out under the stars (besides a good quality red light) is a laser pointer:

"My laser pointer and a pair of binoculars is a big hit," said Rob F. "It's all impromptu - on the fly and opportunistic (as opposed to setting up and trying to orchestrate everyone) you point out constellations and put the binos on the Moon or Jupiter and its moons and people are blown away - some people are so impressed that they ask to join you on a proper star party."

Still, there are some hobbyists that can't bare to leave home without their telescopes, especially if they're headed into the wilderness where the sky is dark and the views are deep.

So what are the best telescopes to bring on a camping trip?

Orion photographer and astronomer Mark Bell, gives a simple answer: "The biggest telescope you can fit in your car." But we understand that's not everyone's ideal.

Here is a short list of tried and true Orion telescopes that performed well on camping trips, recommended by our Facebook fans:

Amateur astronomer Christopher Doll of Washington State began stargazing several years ago to help with his Space and Astronomy art. He's brought telescopes camping with him several times, and shares his experiences, first with a small tabletop telescope, and later with a giant Dob:

At first glance, it looked to me like a toy. How could such a small telescope be any good? ... On our first stop at a wonderfully dark campsite just inside the Montana/Idaho border, I had the StarBlast set up on the picnic table and was viewing in about five minutes. What a Joy! My last telescope was a 3 ˝" wobbly reflector that was never collimated. The StarBlast was easy to move, point, focus and after tightening the bolt at the base, it would just stay wherever I pointed it.

Each night of our trip I looked forward to parking the RV and setting up that StarBlast for another view of the sky. I saw Andromeda for the first time, a couple of the brighter star clusters, and the views of the quarter Moon were stunning. I was quite impressed with the tabletop setup. There was no fussing with tripods, it was easy to point, and comfortable to use - and carrying it wasn't difficult at all. We even brought it across a lake in Michigan by boat to a remote cabin, covered in plastic bags for protection. I'm happy to see that a 6" version of the StarBlast is also available. These tabletop telescopes quickly went onto my short-list of telescopes I'd like to own. I can't recommend them enough. 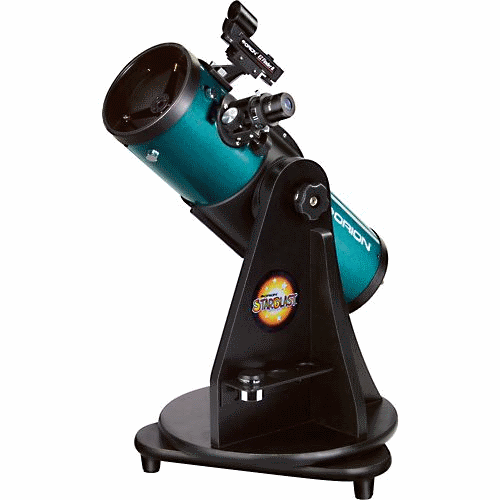 Orion StarBlast 4.5 Astro Reflector Telescope -
Compact enough to sit on a picnic table under the stars.

But this spring, Doll decided to take it up a notch, and lugged two Orion XT10i Dobsonian telescopes on a tent-camping trip. Here is how it went:

A friend and I packed up our Orion XT10i Dobsonians for a weekend camping trip on South Whidbey Island, out in Puget Sound. This time, however, I did not take my RV. This was a tent camping weekend. We drove separately with our cars packed with gear and the Orion Dobsonians. At first I was a bit reluctant to pack such a large scope, but it fit well in the back of our Chrysler Pacifica. (Most of my camping gear was in a car top carrier, leaving me plenty of room inside the vehicle for the telescope.)

The campsite was surrounded by trees with only a small window above the tents for stargazing. We set up the telescopes, checked the collimation, and got them ready for the evening. Since the campsite offered a poor view, we scouted out other locations within the park. The parking lot of the park provided a wider skyline, and better yet, it led to picnic areas overlooking Puget Sound --A sweeping view from the southeast to the southwest, giving us wonderful views of Saturn and the Moon.

Unfortunately, these picnic sites were uphill from the parking lot and required us to move the telescopes over 40 yards of rough paths. It was a bit of work, but we took it slow and got both of them set up within fifteen minutes. While not as portable as the tabletop StarBlast models, the 10" Dobsonian made it well worth the effort. It was so impressive that the park ranger, who'd approached us to see what we were doing after hours in the parking log, stuck around the remainder of the night, sharing views through both telescopes.

I will admit that after spending the weekend moving the larger XT10i around the campsite, I was feeling it in my back and legs. My recommendation: Disassemble the tube from the base and move them separately. It's much easier to navigate short trails and uneven ground this way. The padded case available for the XT10i tube has carry straps that are well-balanced to help carry the tube (assuming you place the heavier side with the mirror on the short end) and I definitely recommend it as an option.

In conclusion, between these two camping trips, I've been fortunate to try out two different Orion Telescopes, and found them both to be wonderful tools to have on hand for those dark skies. Ironically, I ended up transporting the smallest (the 4.5" StarBlast) in a giant motor home, while the largest was packed into my Chrysler Pacifica. I have to return the Orion XT10i shortly, but I've enjoyed it so much that it's likely to be the first that I purchase for myself- both for home use and camping excursions. The smaller StarBlast models are certainly easier to pack into a smaller vehicle, but if you're motivated and pack efficiently, a larger 10" Dobsonian will provide better views. Whichever way you go, telescopes are a blast to take camping!

Christopher Doll is an accomplished Space/Astronomy Artist, UX designer for software, and builds award-winning scale model spacecraft from science fact and fantasy. He lives in the Pacific Northwest with his wife and two daughters, and has recently returned to the joy of amateur astronomy. You can read about his experiences and view samples of his work at: http://www.christopher-doll.com.

Have you ever taken a telescope camping? Tell us about it in the comments!