The following constellations and objects can be found on Friday and Saturday, July 26 and 27, 2013.

This weekend the moon rises early for deep sky observers. But you can still get in a few hours, hone your skills, and enjoy some nice views of deep sky objects. Let's get in some practice "mano a cielo" - turning off our electronics (if you use them) and practice a bit of star hopping - using patterns in the sky to find your way to some nice targets. Align your Orion EZ Finder and/or 9x50 optical finder, with a wide-field eyepiece (26-32mm), and you're ready. The idea is to make finding these objects easy and intuitive, by imagining and using straight lines in the sky. 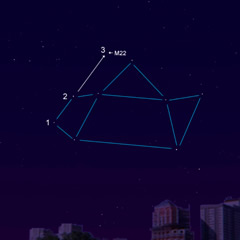 Our first object is a bright beauty, a giant Globular Cluster, Messier 22 (M22). Some observers like seeing this one as the sky is darkening, because the old red giant stars in the cluster show well in twilight. Use the "handle" and the Teapot shape (asterism) of Sagittarius, low in tonight's southern sky, and draw an imaginary line not quite one and one-half the handle's distance up toward the top. One, two, three, you're there! M22 is a great sight in almost any size telescope - large and bright, it is unmistakable. 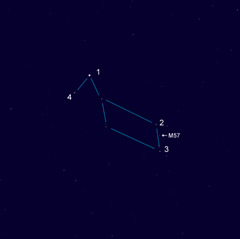 The Ring Nebula, Messier 57, is a wonderful target for kids to find. An Ultrablock filter helps brighten its circular shape. The small constellation Lyra is two-thirds up the eastern sky tonight. The bright star Vega anchors Lyra, with a small parallelogram extending south. "The Ring" is about halfway between stars 2 and 3 of the parallelogram. Also peek at Epsilon Lyrae (4), the "Double-Double" Magnify this "double star" until you see each star as a double! 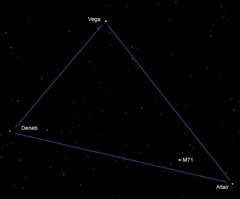 Here is a big picture star hop that you'll enjoy returning to over and over. Covering a wide potion of the sky, the triangle id described by the first magnitude stars Vega, Deneb (in Cygnus) and Altair (in Aquila, 45 degrees up in the southeast). This is called the Summer Triangle, and knowing it familiarizes you with a big swath of sky, making star hops in some of its constellations quite easy. For example, next we move to a star hop using Altair and Vega. 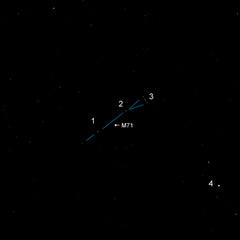 Sagitta - "The Arrow" is dim and diminutive compared to many other constellations. In the middle of the shaft of The Arrow is the star cluster M71, harder to resolve (visually break up into individual stars) than many of the other bright Messier star clusters, but its location makes it an easy target. Saggita's "feathers" (3) is almost on the line between Vega, and the bright star Altair (4), 1/4th the distance toward Vega. Then, by placing your finder in the middle of the arrow's shaft, and with a little luck, the star cluster should be a bulls-eye!

Star hopping is something of a treasure hunt. The prizes are in the sky, hidden, and waiting to be discovered and enjoyed. Part of the fun can be the hunt! If you'd like to make star hopping easier, I recommend purchasing a simple inexpensive tool called a Planishpere, which Orion can provide. It will show you the constellations and stars for any date and time of the year. Once you learn a few constellation shapes, star hopping becomes an easy and enjoyable endeavor, for observers of literally any age.

Mark Wagner is a life-long astronomy enthusiast and deep sky observer. He has spent the past twenty years popularizing amateur astronomy in the San Francisco bay area through his writing and community building. A past president of the San Jose Astronomical Association, he founded what is now the annual Golden State Star Party in California. Please post if you have comments, questions, sketches or images you've taken of the targets mentioned above.