Tonight we'll take a star hop from helium rich Lambda Scorpii about three fingerwidths east-northeast to an even more prominent area of stars that was known to Ptolemy as far back as 130 AD. Astronomers throughout the ages have spent time with this cluster: Hodierna as Ha II.2; Edmund Halley in 1678 as number 29, J. Derham in 1733 as number 16, Phillipe De Cheseaux as number 10, Louis Lacaille as II.14; Johann Bode as 41; once for William Herschel and again for John Herschel as h 3710; Dreyer as NGC 6475... But we know it best as M7 (Right Ascension: 17:53.9 - Declination: -34:49).

Set against the backdrop of the Milky Way, even the smallest of binoculars will enjoy this bright open cluster while telescopes can resolve its 80 members. Roughly 800 light-years away, it contains many different spectral types in various stages of evolution, giving the cluster an apparent age of about 260 million years. Full of binaries and close doubles, an extreme test of tonight's lighting conditions would be to see if you can spot the 11th magnitude globular cluster NGC 6453 (Right Ascension: 17 : 50.9 - Declination: -34 : 36) to the northwest!

And for last, the densely populated open cluster M11 (Right Ascension: 18:51.1 - Declination: -06:16). The "Wild Duck" cluster soars about a fist's width northeast of M16. Dominated by a single 8th magnitude star, this conically-shaped 3,000 member assembly of stardust easily resolves into innumerable stars with any significant amount of magnification. Through intermediate aperture, this 6000 light-year distant, 250 million year old cluster takes on a new form as several hundred 13th and 14th magnitude members begin to spill outside its V-shaped bounds! Discovered by Gottfried Kirch of Berlin observatory in 1681, the cluster was first noted as stellar by William Derham in the first third of the 18th century. Charles Messier added it to his catalog May 30, 1764.

Tonight our study of globular clusters continues as we look deeper into structure. As a rule, globular clusters normally contain a large number of variable stars, and most are usually the RR Lyrae type. At one time they were known as "cluster variables," with their number differing from one globular to another. Many globulars also contain vast numbers of white dwarfs. Some have neutron stars which are detected as pulsars, but out of all 151, only four have planetary nebulae in them.

Now, let us head toward the emerging constellation of Pegasus and the magnitude 6.5, M15 (Right Ascension: 21:30.0 - Declination: +12:10). Easily located with even small binoculars about four degrees northwest of Enif, this magnificent globular cluster is a true delight in a telescope. Amongst the globulars, M15 ranks third in variable star population with 112 identified. As one of the densest of clusters, it is surprising that it is considered to be only class III. Its deeply concentrated core is easily apparent, and has begun the process of core collapse. The central core itself is very small compared to the cluster's true size and almost half M15′s mass is contained within it. Although it has been studied by the Hubble, we still do not know if this density is caused by the cluster stars' mutual gravity, or if it might disguise a supermassive object similar to those in galactic nuclei. 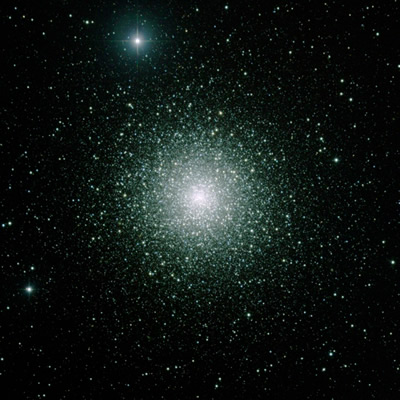 M15 was the first globular cluster in which a planetary nebula, known as Pease 1, could be identified. Larger aperture scopes can easily see it at high power. Surprisingly, M15 also is home to 9 known pulsars, which are neutron stars left behind from previous supernovae during the cluster's evolution, and one of these is a double neutron star. While total resolution is impossible, a handful of bright stars can be picked out against that magnificent core region and wonderful chains and streams of members await your investigation tonight!

Tonight, begin with just your eyes as you gaze about four fingerwidths above the top of the Sagittarius "teapot dome" for an open window on the stars and mighty M24 (Right Ascension: 18:18.4 - Declination: -18:25)... 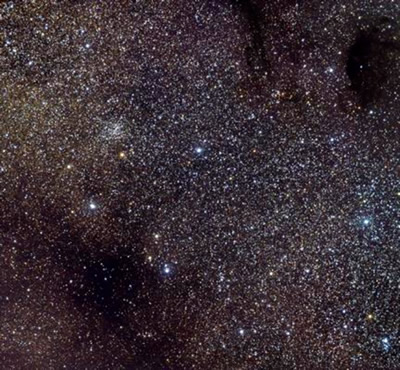 This huge, hazy patch of stars is in reality an area of space known as "Baade's Window" - an area free of obscuring gas and dust. Cataloged by Messier in 1764 as object 24, even small binoculars will reveal the incredible vista of the "Sagittarius Star Cloud." Although it's actually not a cluster, but rather a clean view of an area of our own galaxy's spiral arm, that will not lessen the impact when viewed through a telescope. Spanning a degree and a half of sky, it is one of the few areas in which even a novice can easily perceive areas of dark dust.